8 March 2018
“Be there to wipe away the tears of those who have been left bereft, heartbroken and vulnerable” – Hazrat Mirza Masroor Ahmad

The World Head of the Ahmadiyya Muslim Community, the Fifth Khalifa (Caliph), His Holiness, Hazrat Mirza Masroor Ahmad delivered the keynote address at the International Conference of the charity Humanity First on Saturday 3 March 2018.

The 3-day conference, held at the Baitul Futuh Mosque in London, was attended by more than 220 delegates from 27 countries around the world.

During the keynote address, Hazrat Mirza Masroor Ahmad spoke of the objectives of Humanity First, outlining its mission to serve those in need, “irrespective of caste, creed or colour”.

His Holiness said that conflict and inequality were rising across the world and that much of the world’s suffering was a result of the failings of mankind.

“In almost every part of the world, restlessness, anxiety and conflict are on the rise. Much of the disorder and suffering is entirely man-made and a direct result of the wrongful conduct and injustices perpetrated by humans. Wars are being fought, conflicts are erupting and horrific cruelties are being committed…Both domestically, and at an international level, society is becoming increasingly divided and fragmented.”

“Catastrophic natural disasters are continuing to occur across the globe, wreaking havoc and causing indescribable devastation and grief. Thus, unquestionably, the world we are living is extremely volatile and turbulent.”

His Holiness said that Humanity First should be at the forefront of providing relief to all those suffering.

“Irrespective of the cause of the suffering, if we claim to be true Muslims, it is our obligation and paramount duty to assist all people who are facing difficulties and to strive to alleviate their pain and distress.”

His Holiness said, the primary aspiration of Humanity First should always be to “alleviate the physical and mental suffering of mankind.” He described ‘service to humanity’ as an inherent and fundamental part of Islamic faith. 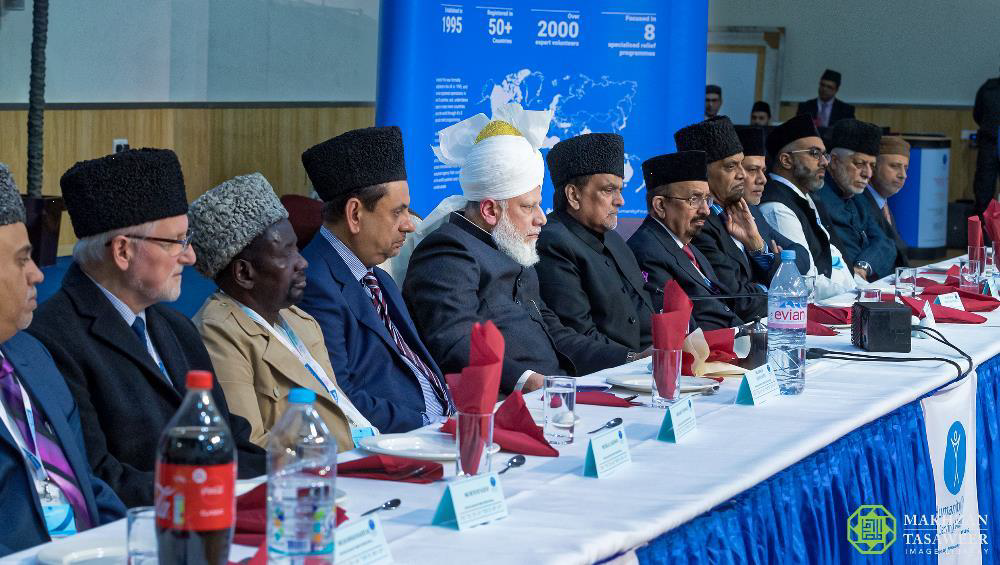 His Holiness stated the very foundation of Humanity First was laid in order to fulfil the Islamic responsibility of selflessly serving mankind.

“Certainly, it was to fulfil this objective of serving others selflessly for which Humanity First was established. This is what sets you apart from other organisations because you are not serving in Humanity First only due to your good nature or as a worldly duty, rather your service is actually a demand and calling of your faith.”

“Islam requires us to bandage the wounds of those in pain, to remove the anxieties of those who are distressed and to show love and compassion without any desire for recognition or worldly reward. Thus, wherever any person is suffering or facing cruelty, it is your duty to be there to help and support them.”

Hazrat Mirza Masroor Ahmad called on the members of Humanity First to focus all their abilities towards bettering the lives of those who are less fortunate.

“At all times, we should utilise our capabilities and skills to the very maximum in order to remove the hardships of such innocent people and to comfort those stricken by grief. We should be there to wipe away the tears of those who have been left bereft, heartbroken and vulnerable. We should be there to give hope to those who were previously hopeless.” 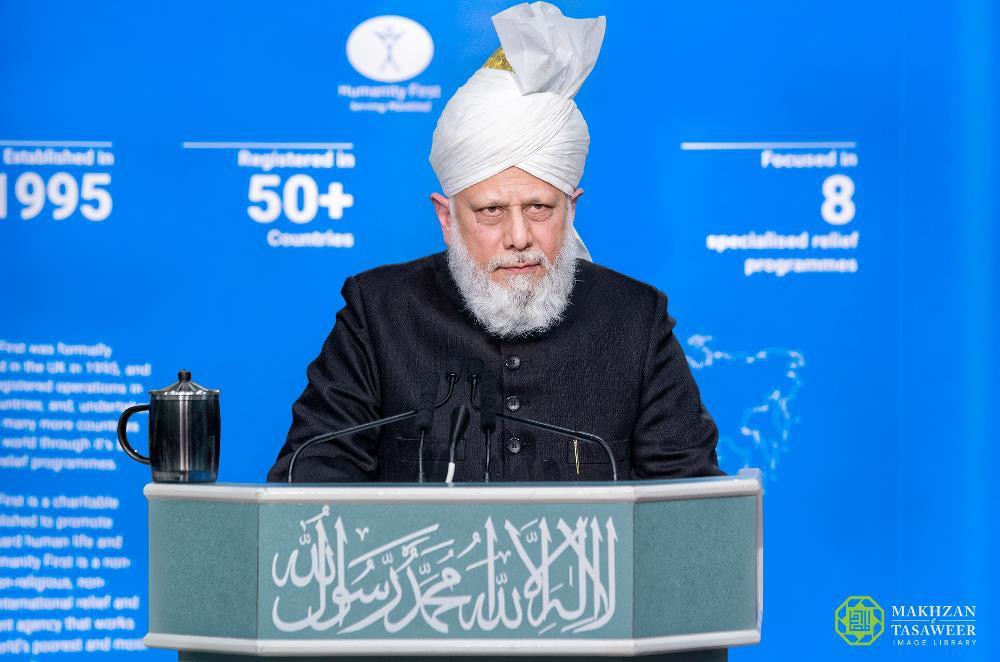 His Holiness praised the humanitarian projects established by Humanity First around the world, including the hospitals and medical camps it was running, as well as the clean drinking water it was providing in deprived and remote parts of the world.

His Holiness mentioned the Nasir Hospital, being built by Humanity First in Guatemala which will be opened soon. He instructed that Humanity First should ensure that the hospital proves sustainable and fulfils its mandate to serve mankind.

“In Guatemala, Humanity First USA has built the Nasir Hospital which is now close to completion. However, do not think that the construction is the end, rather it is only the end of the beginning. Now, you will need to acquire doctors, nurses and other staff to ensure that the hospital does not become a white elephant but comes to fulfil its mandate and mission to serve the local people by providing high quality healthcare to them.”

His Holiness counselled of the importance of humility. He said that the success of Humanity First was not dependent on individuals, no matter how talented or capable, rather it was due to the Grace and Blessings of God Almighty. He said those who served in Humanity First should consider it a great privilege to serve others and to act upon the teachings of their faith.

“You should always keep in mind that whatever opportunities you have to serve are due to the Blessings and Favours of Allah the Almighty and because you are following the true teachings of Islam as taught to us by the Promised Messiah (peace be upon him).”

“Every Ahmadi Muslim who serves in Humanity First should remain forever grateful to Allah the Almighty for the opportunity to serve and to gain His blessings and rewards.”

“I pray that Humanity First continues to go from strength to strength and fulfils its objectives of serving humanity, irrespective of caste, creed or colour, throughout the world. May Allah reward all of you for your sincere efforts and enable you to increase your service to humanity. 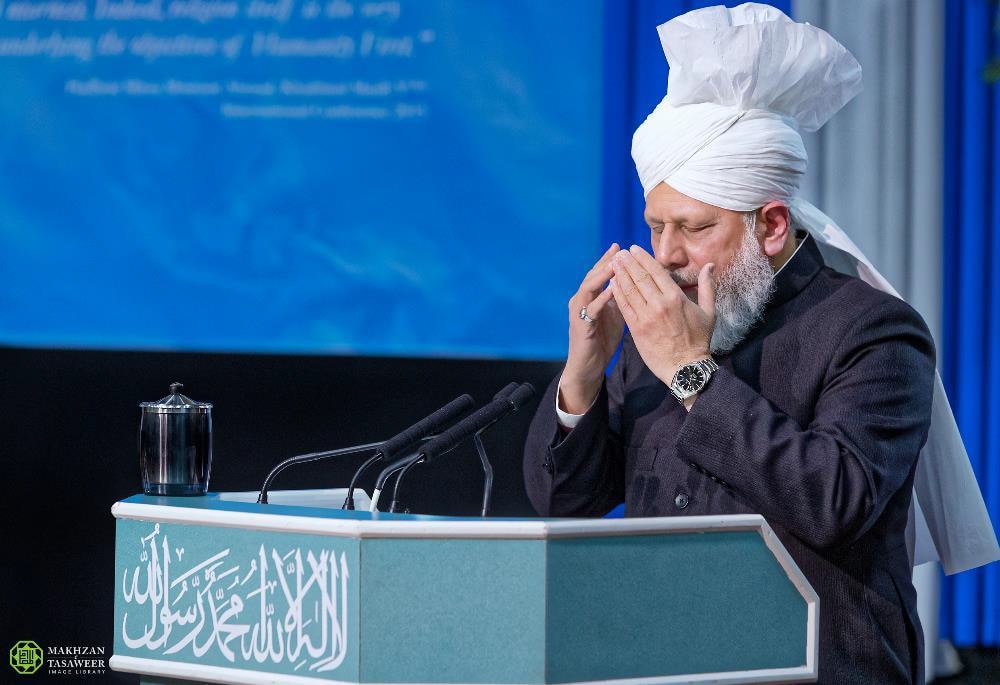