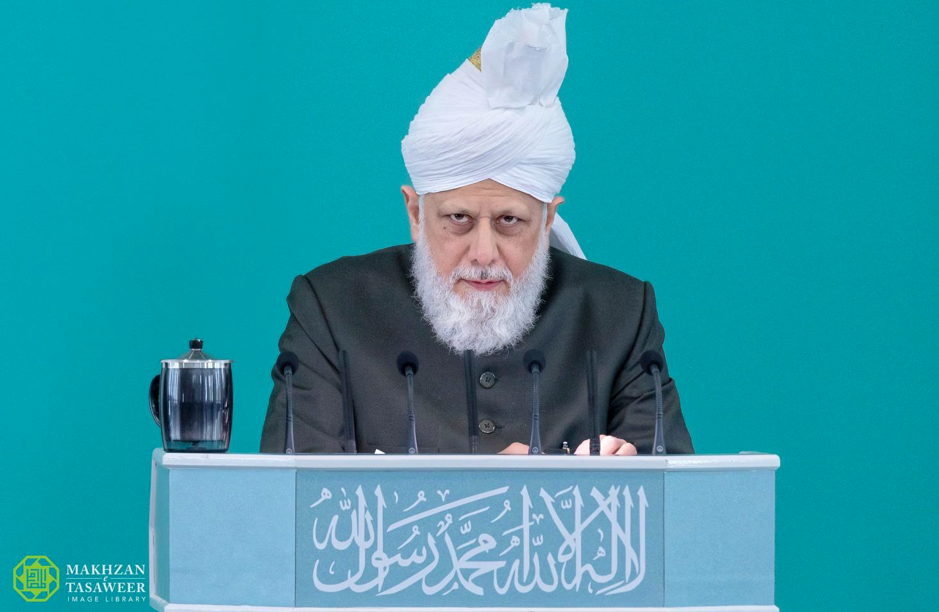 Following the outbreak of the Coronavirus, the World Head of the Ahmadiyya Muslim Community, the Fifth Khalifa (Caliph), His Holiness, Hazrat Mirza Masroor Ahmad has instructed Ahmadi Muslims to adopt all measures recommended by health authorities to help curb the spread of the virus.

Speaking at the Baitul Futuh Mosque in London, during his Friday Sermon delivered on 6 March 2020, His Holiness said that it was appropriate to avoid large gatherings during the current outbreak and instructed Ahmadi Muslims to refrain from attending their Mosques if they developed any symptoms associated with the coronavirus.

“It is very important to act upon the precautionary measures that are being announced [by the health authorities]. Large gatherings should be avoided and those coming to the Mosque should also take special care. If anyone shows any signs of a slight fever, flu or body-ache, sneezing or other symptoms then they should not come to the Mosque. Mosques have rights upon the people that visit them. It is the right of the Mosque that no one should attend who can affect other attendees of the Mosque with a contagious illness. Those with contagious diseases should especially take care to avoid Mosques.”

His Holiness also advised that people should be extremely conscious of hygiene at all times. He said that hands should be regularly washed and said that Islamic teachings, if followed properly, established a very high standard of cleanliness.

“Doctors are advising that hands should be washed regularly and hand sanitisers should be used. If one’s hands are dirty, they should avoid contact with the face until cleaned. This should be followed but, regardless, for us as Muslims, if someone prays five times a day, they will wash themselves properly five times a day through ablution and amongst other things, will be running clean water through their hands and nose, which ensures personal hygiene is maintained at all times and will reduce the need for hand sanitisers that are already reported to be in short supply.”

His Holiness said that Islam emphasises that within a Mosque, one should avoid all things that negatively affect others and uphold its rightful etiquette. In fact, His Holiness said that the Holy Prophet Muhammad (peace and blessing be upon him) said that anything that smells bad should not be brought into the Mosque.

His Holiness also said that some governments and organisations have now advised members of the public to avoid shaking hands with others. In light of this, His Holiness said that whilst shaking hands increases a bond of brotherhood between people, it is better to avoid it under the current circumstances.

His Holiness also noted that whilst Muslims have often been criticised for avoiding shaking hands with the opposite gender, many people in general are now preferring to not shake hands with other people and are questioning the Western conventions of greeting through physical contact. He said when Muslims avoid handshakes they do so politely so that the feelings of the other person are not hurt but now in the wider public people are abruptly rejecting the extended hands of other people.

His Holiness also urged Ahmadi Muslim to pray for the world and said that the world should realise that it must turn towards its Creator.

“Allah the Almighty knows best how widespread this virus will become. It has been seen that in this era since the advent of the Promised Messiah (peace be upon him) there has been an exponential increase in pandemics, earthquakes, storms and natural disasters. If this virus is a sign of the displeasure of God, then there is a great need to turn towards God in order to safeguard oneself from the effects of the virus.”