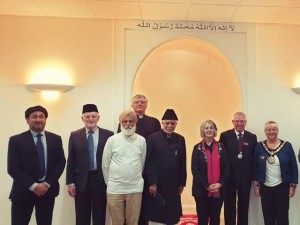 People from all walks of life and religious faiths came together at a successful conference hosted by Hartlepool’s Nasir Mosque.

The interfaith conference on religion and human rights at the mosque in Brougham Terrace on Sunday, September 22, was attended by 75 guests.

Organisers said it highlighted the importance of free speech, respect and tolerance.

Councillor Loynes receives a cheque for £400 towards her chosen charities.

Father Graeme Buttery of Hartlepool’s St Oswalds Church, discussed what Christianity says about human rights while Maulana Ataul Mujeeb Rashid, Imam of the London Mosque explained the teachings and fundamental concepts of Islam on the subject.

The local Jewish and Sikh communities were also represented.

Nasir Mosque Imam Tahir Selby said: “We always feel that it is important to bring together people from different faiths onto one platform, to give everyone an opportunity to give their views.

“I hope that this meeting helped the audience to hear the different views expressed and helped them appreciate the rights that we have in this country and ensure that we all are tolerant of each other no matter what their views, colour or religion.

“The meeting was very successful and very good comments were received from the guests and some expressed a willingness to attend the Annual Peace Conference at the end of the year.”

Councillor Loynes thanked the Ahmadiyya Muslim Community after being presented with £400 towards her chosen charities and praised their work to bring harmony among different communities.