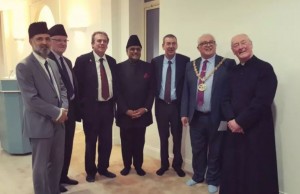 The third annual Peace Seminar in Hartlepool has been hailed a success. Religious and community leaders from across the town gathered at the Nasir Mosque for the event. Rafiq Hayat giving his speech. The Brougham Terrace building welcomed a number of guest speakers and civic dignitaries to the seminar, which was organised by the Ahmadiyya Muslim Community. The central theme of this year’s conference was ‘Global Conflict and the Need for Justice’. Among the guest speakers were Syed Hashim Ahmad, president of Hartlepool AMC, Bilal Atkinson, regional president of AMC, Barry Coppinger, Cleveland’s Police and Crime Commissioner, Rafiq Hayat, the national president of AMC, Mike Hill MP, Coun Paul Beck, Mayor of Hartlepool and Father Michael Griffiths, the parish priest of the Holy Family Hartlepool. Shop like nobody else Over 10 Million New Items Promoted by eBay Mosque Imam Tahir Selby, said: “The event was praised by the people who attended and they found it enlightening and thoughtful.”

The event was praised by the people who attended and they found it enlightening and thoughtful Tahir Selby More than 120 people gathered for the seminar and the keynote address on global conflict and the need for justice was given by Mr Hayat who had travelled up from London to attend the event. During the afternoon Coun Beck, was presented with a cheque of £500 for his nominated charities. Cheques for £500 each were also presented to both CAB and the Royal British Legion Poppy Appeal.

Mr Selby said: “The British Legion in turn presented a certificate of thanks to Muhammad Ali, the youth leader for the Ahmadiyya Muslim Community in Hartlepool, whose team helped raise over £600 for the poppy appeal this year.” Rafiq Hayat presenting a cheque to the Mayor of Hartlepool, Coun Paul Beck. At the end of the speeches Mr Coppinger gave the thank you address. Mr Selby said: “Our purpose is to open up the mosque to people as much as possible and bring people together. “It is not just about religion. We are trying to bring in people from all different walks of life to talk about peace and find hopefully some unity and methods of how we can resolve the present crises in the world.” The mosque holds a number of open events at other times of the year to promote better understanding of its place in the community.