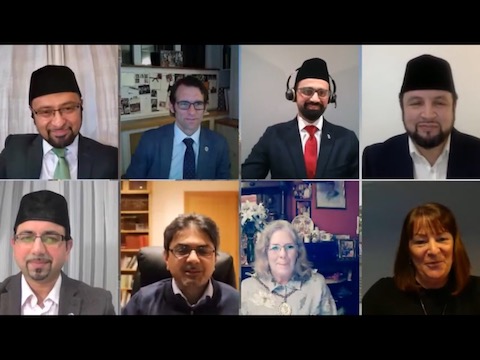 Community heroes of the Covid pandemic have been recognised by the Guildford Branch of the Ahmadiyya Muslim Community.

The winner of the Individual Award was Jenny Cole along with her husband Bill.

Jenny, supported by Bill, bought 9km of elastic and made 2,800 masks by hand to donate to vulnerable local residents, and raised £3,000 which was donated to Ash Football Club.

Jenny will be donating the £100 prize to Christopher’s Children’s Hospice in Guildford. She said: “If I could save just one life, just one, through a mask, then it really is all worthwhile.”

Her award was presented by the Town Mayor of Godalming, Penny Rivers. She said: “There have been many acts of kindness, small and big, and it is right to acknowledge these acts of dedication and service to others.  We are in this together and we will get through this together, that is our hope.”

The Group Award went to Ash, Ash Vale and Ash Green Coronavirus Support Group. It is a Facebook group with 1,600 members, set up and run by volunteers to collect and deliver shopping and prescriptions and providing telephone support for those in need during the pandemic and is having a truly positive impact on its local community.

The leader of Guildford Borough, Council, Joss Bigmore, presented the award to Carla Morson on behalf of the support group.

Carla announced that the award would be on display in St Mary’s Church in Ash Vale, and the prize money would be donated to the food parcel project run in partnership with St Mary’s Church which feeds more than 30 families a week.

Cllr Bigmore added: ““I am honoured to be able to support these awards and, on behalf of Guildford Borough Council.  I thank the Ahmadiyya Muslim Association for everything they have done, and for recognising the fantastic work that we have seen in our borough in the last 12 months by organising this event.

“We have seen so many examples of people embracing their communities and selflessly giving their time to help one another and those qualities accurately describe the winner of our organisation award.”

The evening began with a short video about the efforts and activities of the Ahmadiyya Muslim Community in the name of humanity, peace and justice worldwide.

This was followed by a brief history of the community in the UK and a summary of the local community efforts during the pandemic by the president of the Guildford branch, Khalid Ahmad Bhatti.

He said these efforts included making and distributing hot meals to frontline workers, delivering PPE on behalf of the government and delivering food and medicines to vulnerable groups.

The event neared its conclusion with a short talk delivered by the UK director of outreach and public relations for the Ahmadiyya Muslim Community, Ibrahim Ikhlaf.

Mr Ikhlaf concluded: “the Ahmadiyya Muslim Community in the UK is at the forefront of helping anyone that needs our help, as we consider bringing relief to others by alleviating physical and mental suffering of mankind as our mission, moreover an integral part of our faith.”

Finally, a closing vote of thanks by Cllr Joss Bigmore who said: “One of the qualities that has shone through in our two award winners, and in so many of the nominees, has been their humility and surprise at being honoured, they see it as just doing their bit for their community, but it really is far more than that. They are starting organisations and movements from nothing, and in doing so saving lives and having a lasting effect on their towns and villages.”

The evening concluded with a silent prayer led by Ibrahim Ikhlaf, a special request of prayers was also mentioned for the Mayor of Guildford, Richard Billington, who was unfortunately unable to join the event due to ill health.

The full video of the live event is now available on YouTube and can viewed at https://youtu.be/V1IJ4TE2uQE