First World War will be marked at Hartlepool mosque event 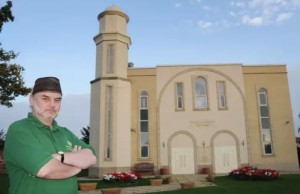 A seminar is set to be held which will focus on the First World War and the Bombardment of Hartlepool. The Nasir Mosque, in Brougham Terrace, Hartlepool, is hosting the Annual Peace Seminar called ‘World War One: Centenary of the fulfilment of a great warning’, delivered by Bilal Tahir. The event is organised by the Ahmadiyya Muslim Community and is being held on Sunday, November 18, at 3pm. Organisers say anyone can attend, and called for people to get in touch. Tahir Selby, Imam at the Hartlepool mosque, said: “We will be holding our Annual Peace Seminar on Sunday, November 18, and this year will commemorate the centenary of the conclusion of the Great War of 1914-1918 and that Hartlepool was the very first town to be shelled in England.

“We have invited a speaker, Dr Bilal Tahir, to give a talk on an astonishing prophecy by the Holy Founder of the Ahmadiyya Muslims Community, relating to the tragic conflict and aftermath of the First World War. “He will also speak on the incident of the shelling of Hartlepool. “Furthermore, we have also invited the chairman of the Heugh Gun Battery Trust, Reg Wright, to speak. “It should be an interesting talk and I hope people will also want to attend. “The event will be by invitation only, and they can contact me or send me an email, then I will send them an invitation card.

” The mosque is hosting the event at 3pm on Sunday, November 18. The event is held annually, and last year’s key speakers were Father Michael Griffiths, the Parish Priest of the Holy Family Hartlepool, Hartlepool MP Mike Hill, Cleveland Police Commissioner Barry Coppinger, and the main speaker was Rafiq Hayat, the National President of the Ahmadiyya Muslim Community. The previous year’s seminar was attended by the Bishop of Jarrow, the Right Reverend Mark Bryant, and Maulana Ataul Mujeeb Rashed, Imam of London Mosque.