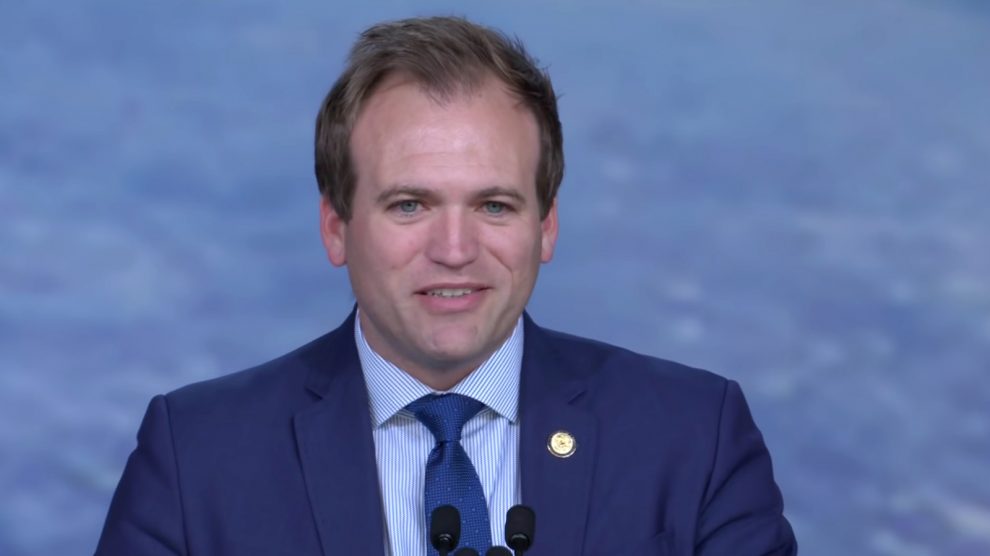 ALTON, United Kingdom (RNS) — Johnnie Moore, one of President Trump’s evangelical advisers, stood before the Ahmadi caliph and tens of thousands of his Muslim followers on Saturday (Aug. 4) and celebrated the phrase “Allahu akbar,” Arabic for “God is the greatest.”

“I grieve at the defilements of God’s name to promote (acts of terrorism and murder),” Moore said in a short speech at the Ahmadiyya Muslim Community’s annual Jalsa Salana convention in Alton. “God truly is great, and he is a God of peace, and you are a symbol of it.”

The Jalsa, billed as the U.K.’s largest Muslim convention, was presided over by Mirza Masroor Ahmad, the caliph and leader of the world’s minority Ahmadi Muslims. The denomination’s members, estimated to number 10 million to 20 million, face often-deadly persecution from hardline clerics who consider them apostates.

Moore, whom Trump recently appointed as a commissioner on the United States Commission on International Religious Freedom, has drawn criticism from many in liberal and Muslim activist circles for his alignment with Trump. But for Ahmadis, an alliance with a political conservative like Moore is nothing unusual. Their strong advocacy of religious freedom and vocal condemnation of religious extremism have gained them several unlikely allies in the West.

Muslim advocacy groups have long noted that it’s difficult to move in Western religious freedom circles. Muslim activists and researchers told Deseret News in 2016 that, particularly because of perceived ties to extremism, their contributions in the space were not valued. On top of that, many Muslim civil rights advocacy groups have shunned conservative politicians and organizations because of their ties to anti-Muslim policies. And Muslims themselves feel disconnected from the idea of religious freedom because of how they say it has been politicized by the Christian right.

But Ahmadi officials say they are happy to work with any nongovernmental organizations or politicians who share their goals. Ahmad told reporters during a news conference after the Jalsa that his community will join a secular organization working toward good. “When the purpose is not religious, we can work together for humanitarian work,” he said.

In 2014, Reps. Peter King, R-N.Y., and Jackie Speier, D-Calif., became co-chairs of the 32-member Congressional Ahmadiyya Muslim Caucus for religious freedom. Before that, King made headlines for chairing a controversial 2011 hearing about radicalization among U.S. Muslims — a hearing many Muslims criticized as an Islamophobic witch hunt. But one prominent U.S. Ahmadi wrote a letter to the editor in The New York Times at the time: “There should be no reason to blindly accuse the Muslim-American community of noncooperation. But if the government thinks that Congressional hearings will improve homeland security and help expose those exploiting Islam, I assure full cooperation.”

At the AMC’s annual Jalsa in Canada, too, speakers have included conservative former Prime Minister Stephen Harper, who was branded an Islamophobe by many Muslims and liberals after, among other comments, his attempt to call for limitations on wearing the face-covering niqab shortly before the elections. (Many Ahmadi women worldwide wear the niqab.)

Speakers at this year’s Jalsa U.K. included Sara Khan, head of the U.K.’s new Commission for Countering Extremism. Her appointment drew criticism because of her support of policies that some claimed damaged government relations with Muslim communities.

“It is the Ahmadiyya Community’s defiant rejection of extremism often in the face of abuse, intolerance and persecution that brings me to today’s Jalsa,” she said. “I am here today to extend my hand out to you in friendship, solidarity and partnership in our common cause of countering extremism.”

In an age when many critics accuse moderate Muslim leaders of standing silent in the face of Islamist terrorism, the AMC is quick to send out press statements condemning acts of deadly violence. The denomination’s founder, Mirza Ghulam Ahmad, whom members believe to be the messiah, urged a “jihad of the pen” to defend the faith. Every year, the caliph keynotes a National Peace Symposium the AMC organizes in London for a crowd of 800 dignitaries and civic leaders, where he denounces terrorism as well as the governments that enable and sponsor such discord. He has also corresponded with heads of state and delivered speeches on establishing world peace before Congress and the parliaments of Canada and major European nations.

In the U.K., Ahmadis have become well-known for the “human chain” of solidarity they formed last year on the Westminster bridge after a Muslim man drove his car into a crowd there, killing four in what officials called an act of terrorism. Ahmadis’ anti-extremism campaigns in the Western world are wide-ranging: True Islam clarifies that terrorism has no place in Islam, Muslims for Peace shows that the faith revolves around tolerance and justice, Stop the CrISIS and United Against Extremism work against youth radicalization, and Pathway to Peace identifies the requirements for moving toward a lasting world peace. An incredible honor to address the Ahmadiyya Muslim community today on behalf of @USCIRF, during their global gathering in the United Kingdom, over 35-thousand people.

Amjad Khan said his experience engaging with the Obama and Trump administrations shows that it’s not always the case that progressives enact policies that help Muslims. Under Obama, the role of the international religious freedom ambassador remained vacant during much of his administration, and Khan said there were long stretches where the administration would ignore AMC’s efforts to engage.

While many leaders were skeptical that Trump would prioritize Muslim religious freedom, Khan said, the president appointed Sam Brownback to the empty ambassador position in a matter of months, and Brownback’s office now holds weekly roundtables with global stakeholders. And last month, not only did Brownback speak at the AMC’s Jalsa in America, he invited representatives from AMC and a Pakistani Ahmadi victim of persecution – Farooq Kahlon, who was shot five times the day after his son’s wedding by anti-Ahmadi extremists in 2012 – to speak at the State Department’s first International Religious Freedom Ministerial in Washington, D.C.

Brownback’s first international trip once in office was to a camp for persecuted Rohingya Muslims. And his first public appearance was his speech at an event hosted in February by the Forum for Promoting Peace in Muslim Societies, where interfaith leaders signed the Washington Declaration that called for respect for U.S. Muslims and affirmed the rights of religious minorities in Muslim-majority nations.

Regarding largely liberal critics who accuse Moore and Brownback of only caring about religious freedom for Christians, Amjad Khan said: “I always expect commissioners to naturally be passionate about issues they’re personally connected to. That’s why you need a diverse group to bring in their own experiences and interests.”

As a USCIRF commissioner, Moore promised Ahmadis that he had a “personal commitment to make sure that you’re not forgotten, because I believe that the answer to the worst of religion in our world is the best of the best of faith.” He pointed to a recent RNS op-ed he co-wrote calling for international pressure to be placed on the Pakistani government to undo its blasphemy laws against Ahmadis.

That personal commitment is partly because of behind-the-scenes advocacy efforts from Ahmadi representatives.

“I would like to see (Vice President Mike) Pence tweeting about Muslim prisoners of conscience instead of only Christian ones,” Amjad Khan said. “But the principle I advocate is that you must meet with anyone and everyone who will listen to you advocate your cause. Our job is not to dictate the political winds.”

But that doesn’t mean cowing into silence or praise when those people miss the mark, he said. “I’ve told Sam Brownback that when it comes to Islam, he needs to educate himself on this issue or that issue.”

And while many Muslim leaders announced that they would refuse to attend Trump’s controversial White House iftar dinner, held this summer during Ramadan, Ahmadi officials say they would have gladly attended had they received an invitation.

“We would never boycott an event,” Khan said. “It’s not in our DNA. It’s critical for us to have a seat at the table and discuss our concerns.”