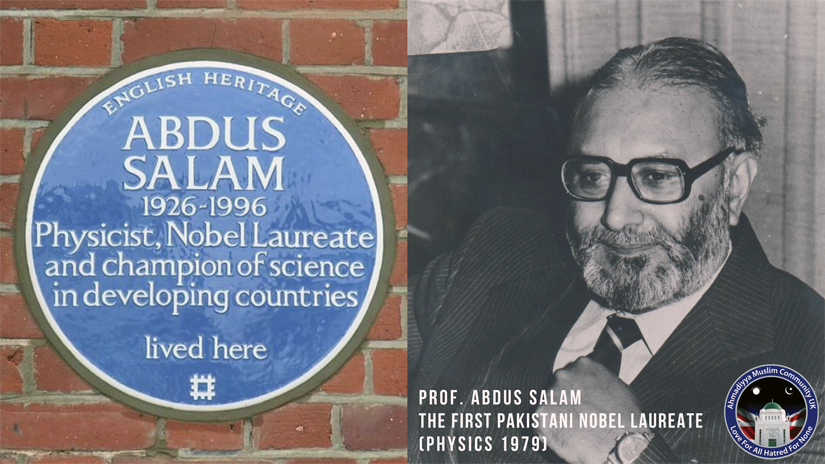 English Heritage is recognising the historic scientific contribution of  the groundbreaking scientist, Professor Abdus Salam, by the installation of a Blue Plaque at his home in Putney, South London. The citation on the plaque will read “Nobel Laureate and Champion of Sciences in the Developing World”.

His life’s work was key to defining a theory of particle physics that is still used today, and it laid the groundwork for the 2012 discovery of the Higgs boson – the particle responsible for giving all other particles mass.

Born in Punjab, India (later Pakistan) he excelled in his studies and secured a scholarship to St. John’s College, Cambridge, where he took a BA (Honours) with a double First in mathematics and physics in 1949: he was a Wrangler. In 1950 he received the Smith’s Prize from Cambridge University for the most outstanding pre-doctoral contribution to physics. He went on to obtain a PhD in theoretical physics at Cambridge, and his thesis, published in 1951, contained fundamental work in quantum electrodynamics which had already gained him an international reputation.

Professor Salam held numerous senior posts in key international organisations and as the Pakistan Government’s Science Advisor he spearheaded the country’s scientific research programme and set up its first national space agency. He also had a deep desire to support researchers from the developing world and established the International Centre for Theoretical Physics in Trieste, Italy that was later named after him in recognition of his immense services. He was a giant in his field with an equally impressive global reputation.

Professsor Abdus Salam was devoted member of the Ahmadiyay Muslim Community and drew his inspiration from Islam’s teachings to study the creation of God.

Despite the fact that Pakistan’s laws persecuted him and his community on grounds of faith, he always held a deep love for his homeland and prayed for its progress.

“This is a great honour and a fitting tribute to the late Professor Salam. He was a true genius whose work on the fundamental forces of nature paved the way for further scientific discoveries. His  dedication, commitment to his scientific field and his passion to serve the cause of education was remarkable and he served his both with distinction.

“He was a cherished member of the Ahmadiyya Muslim Community and we are very proud of him and his achievements. To this day he remains a role model for aspiring scientists everywhere.”