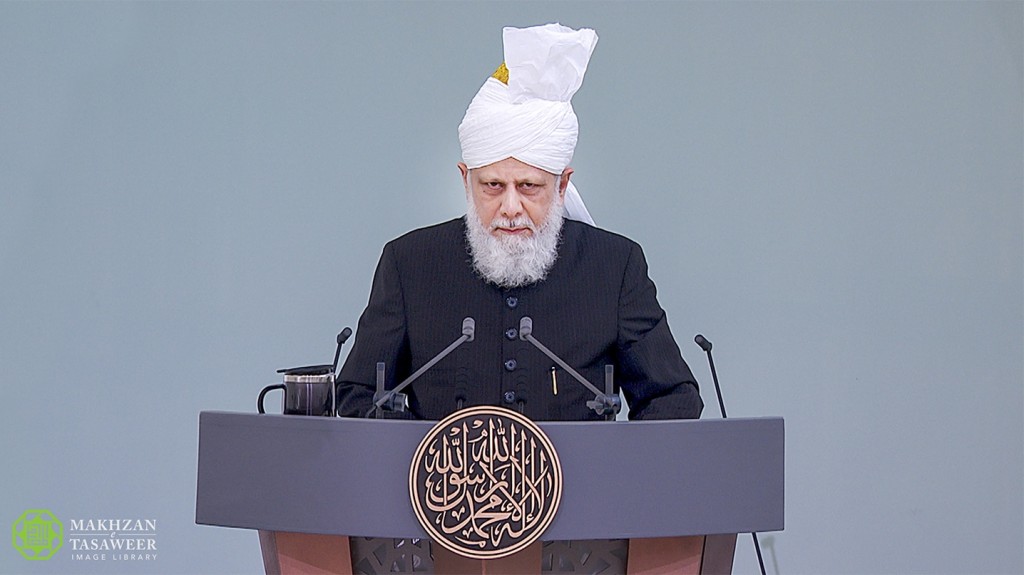 Hazrat Mirza Masroor Ahmad says Ahmadi Muslims should seek a true spiritual Eid, rather than merely observing customs for the sake of it

The World Head of the Ahmadiyya Muslim Community, the Fifth Khalifa (Caliph), His Holiness, Hazrat Mirza Masroor Ahmad, delivered the Eid-ul-Fitr sermon on 24th May 2020 from the Mubarak Mosque in Islamabad, Tilford.

As millions of Ahmadi Muslims around the world celebrated Eid in their homes due to the COVID-19 lockdown, they were able to listen live to the Eid Sermon of their Caliph and to join in with the silent prayer led by their spiritual leader through the global television channel MTA International.

During his sermon, His Holiness spoke about the need for continued spiritual advancement and to maintain and build upon whatever spiritual progress had been attained during the month of Ramadhan. He also offered prayers for the world’s peace and wellbeing and offered greetings of Eid Mubarak to Ahmadi Muslims across the world.

His Holiness said Muslims were often guilty of celebrating Eid’s customs and traditions without giving thought to its true philosophy or purpose.

“Many of one’s social interactions are carried out as a result of one’s emotions or habits. With regards to Eid, many people celebrate this day out of custom without understanding its true objective. They have grown up seeing their parents and their society celebrating Eid and so they keep up the tradition. Others celebrate Eid because they know that, as Muslims, it is a commandment of God Almighty and His Messenger (peace and blessings be upon him) to celebrate Eid but they fail to inquire into the purpose of Eid and its true meaning. They do not ponder over its benefits and do not assess whether they are celebrating Eid in the correct manner or not.”

In light of this, His Holiness said Muslims had a responsibility to identify and understand the true objectives of Eid.

“The Eid that does not have a lasting benefit cannot be a true Eid. True Eid is that which leads to a long lasting change for the better. It is the Eid which nourishes the soul and leaves a person better off. The greatest wealth for a Muslim is, and should always be, the attainment of the pleasure of Allah and that is what constitutes a true celebration of Eid as it is a recognition of real prosperity.”

“Allah the Almighty has appointed this day of Eid after the month of fasting in order to give the glad tiding that one’s fasts have been accepted. Thus, on the occasion of Eid, we should analyse to see if our fasts have indeed been accepted or not.”

His Holiness said there are three types of celebrations of Eid, foremost of which is the Eid of such an individual who was able to truly fulfil the rights of the month of Ramadhan by worshipping Allah the Almighty to the best of their ability and fulfilled the rights of the creation of Allah.

“Such a person attains God and God finds His lost servant and the time of separation ends and it is as if two long-lost friends finally meet each other. A person sits in the company of his Beloved Lord. Such a person celebrates an Eid today and tomorrow. In fact, he or she is forever in a state of Eid.”

His Holiness said that amongst such fortunate people were those who may appear poor and destitute and so rich people, dressed in the newest of clothes, may look upon them and wonder if they are even celebrating Eid. Yet, those people who may be looked down upon are truly celebrating Eid, as they are content having attained the pleasure of Allah the Almighty.

His Holiness said it did not mean that individuals who were wealthy could not celebrate true Eid, rather, there were people who had been granted the wealth of this world who had also attained the nearness of Allah the Almighty by making sacrifices for His sake.

“People in the world have assumed that the hallmark of people who have attained God is that they completely cut themselves off from the material world, whereas the actuality is that they should be completely content in the will of Allah. If Allah feeds them well and clothes them well then they should eat and dress well, but if they are forced to endure poverty and destitution then they should also pass this test with patience. So neither is eating good food a proof of God’s closeness, nor is hunger a sign of His nearness.”

His Holiness described the second type of people who come to encounter the day of Eid and celebrate it in a superficial way without understanding its true essence.

“Then there is the Eid of the second type of people who, according to their means, eat and dress well, apply fragrance, give and receive gifts. They are happy that they have apparently encountered Eid, but this Eid is as distant from them as the East is from the West. Nonetheless, for them ignorance is bliss and they remain content in their superficial celebrations.”

“Such people rejoice and perhaps in their naivety, celebrate even more than those who have attained God and His pleasure. However, the reality is that their hollow celebrations foretell a state of mourning and forewarn an incredibly grave state. Whoever forgets God and neglects the rights of God and His creation and merely rejoices in the shallow celebrations with his loved ones, warrants the displeasure and wrath of Allah, and is thereby destroying themself both in this life and the hereafter. They do not gain anything, rather they are only at loss. The Eid of such people cannot be deemed a true Eid.”

His Holiness then described the third and final type of people who encounter the blessed day of Eid.

“These are those people who know and realise that they are sinners. They know in their hearts that although they fasted, they did not fulfil the rights of those fasts. They have a sense of shame in their hearts. They offer their prayers but then also are ashamed in their hearts that they were unable to perform the prayers in accordance with the conditions laid out by Allah the Almighty. Each of them thinks that even today whilst I have come to this gathering for Eid whilst wearing beautiful clothes and eating good food, I do so only as a tradition and to show others, whereas inside, such a person’s heart is weeping and his mind is filled with worry.”

His Holiness explained that this third type of person, who is remorseful and ashamed of his shortcomings, repents and begs for Allah’s protection and support, to which Allah the Almighty will always respond.

“Allah, who is most Gracious and ever Forgiving towards people, never leaves His follower crestfallen. When someone thinks that the true Eid is in meeting Allah, which he is not able to attain, and his soul repeatedly reproaches him with regards to his actions, he repents and ashamedly turns towards Allah, then when all of this causes him such distress, God hastens towards him… Allah says that ‘I will go to him for he expresses deep regret and remorse and is engaged in repentance and seeking forgiveness. He is fallen, so let Me raise him up again and bring him to Myself.’”

Towards the end of the Sermon His Holiness expressed the need for Ahmadi Muslims to endeavour to become, at the very least, part of the third group of people.

“We should endeavour that if we are not yet of the first type of people, then at the very least we should be part of this third group. For this is no lowly state nor some menial thing, nor is it something through which a person’s standing is lowered…We should not be of the second type of people celebrating Eid, whose only job is to eat and drink and who concern themselves with worldly matters, rather become those who have attained Allah the Almighty. Or at the very least those, who have not yet reached Him, but have fallen at that very place, and whose hearts have broken into pieces through shame and worry, and who have destroyed their own selves due to grief and pain to such an extent that even the Throne of the Divine is moved, and to whom the Master of the Throne Himself comes and seats them in a place of love and affection.” 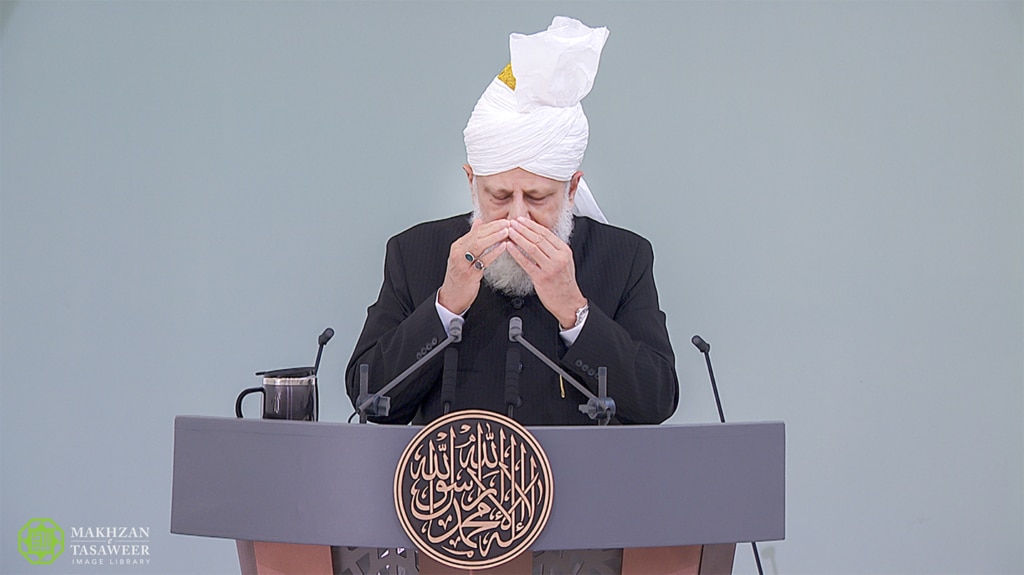 Hazrat Mirza Masroor Ahmad concluded the Eid Sermon by reminding Ahmadi Muslims to pray for all those who were suffering and for the peace of the world.

“Pray for all those Ahmadi Muslims who are being persecuted on the basis of their religion and are being imprisoned unjustly. Pray for their quick release that they too may freely celebrate Eid. Pray for all Muslims and pray fervently for the peace of the world. The leaders of the world, as I have said before, are pushing the world towards a destructive abyss for the sake of their own fleeting vested interests. During the pandemic, as opposed to turning towards Allah the Almighty, such leaders and peoples are further fuelling God’s wrath by their actions.”