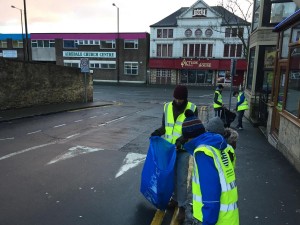 MEMBERS of the Ahmadiyya Muslim Association Keighley started 2018 with a litter picking session on the streets of Keighley town centre.

Volunteers grabbed bin bags and litter pickers and hit the streets of Keighley straight after morning prayers, at the Ahmadiyya Mosque based in Worth Way.

Their efforts were part of the UK-wide Ahmadiyya Muslim Youth Associations’ (AMYA) Mercy for Mankind initiative, which has seen members plant thousands of trees, feed the homeless, visit poorly children in hospital and sell poppies, among other activities.

On New Year’s day in cities and towns across Britain, as well as across the world, members of AMYA got up just after dawn to clean the streets of their towns and cities.

An AMYA spokesman said: “We work with our youngsters and children from an early age to instil in them a sense of pride for where they live and ensure this sense of pride translates into actively contributing to society, be that via litter picking, giving blood, planting trees, helping the homeless etc.

“Activities such as litter picking are an important part of the development of young children.

“Youngsters from the ages of seven from Keighley took part, as well the adults.”

Dr Adeem Rubani, the association’s local youth leader for Keighley, said: “From a religious perspective, both cleanliness and looking after our local communities is an essential part of the Islamic faith.

“The Ahmadiyya Muslim Community has and continues to instil in its young members a sense of civic responsibility, and a desire to make a positive contribution within our local communities.”