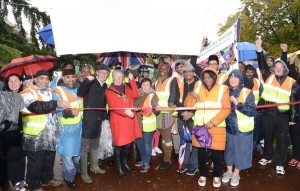 The may have rain lashed down but the dismal weather failed to stop hundreds of people from completing a walk for peace. The Mayor of Wolverhampton, Councillor Claire Darke, is joined by local MPS and religious leaders in a walk for peace at West Park

More than 400 people turned out for the 2.4m stroll through West Park in the city’s heart, despite relentless rain, including Wolverhampton mayor Councillor Claire Darke.

The annual event has been taking place at different venues since 1985, started by the Ahmadiyya Muslim Elders Association, part of the UK’s oldest established Muslim community, which is based on Willenhall Road. The Mayor of Wolverhampton, Councillor Claire Darke, is joined by local MPS and religious leaders in a walk for peace at West Park

Toby Ephraim, one of the organisers, said: “Many people walked all the way in the rain, including the mayor – an amazing woman.

“It is so important for people to come together like this, and as we launch the Poppy Appeal, we think of all the men and women who did not come back from war – so a little rain was not going to stop us walking.

“You could see the community spirit of people coming out, it was a great occasion.” Thousands of people take part in the walk across the country, resulting so far in £5.2 million raised for more than 500 UK-registered charities. All costs are met by membership subscriptions so that all the cash raised goes straight to the charities.

It is hoped this year’s sponsored walk will raise £50,000 nationally. Participants were provided with a free lunch for their effort.

The aims of the walk are to relieve suffering and serve mankind, regardless of colour, creed or race, say the elders. It is hoped by bringing people together to help others it will help promote peace, create greater understanding and promote goodwill amongst people from all walks of life.