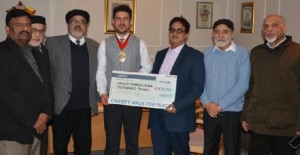 The Ahmadiyya Muslim Elders Association Crawley donated £500 to Forget Me Not which supports people with dementia and their family, friends and carers. It is the Mayor of Crawley, Carlos Castro’s chosen charity. The Ahmadiyya Muslim Elder’s Association (AMA) is based at Noor Mosque in Langley Green. Abdul Gafoor Javaid, the local chapter’s head, said: “The association has been raising funds for UK charities for many years and since the inauguration of Noor Mosque in 2014 we have raised money for the mayor each year.

“Mayor Castro has visited the mosque several times now where we hold many interfaith events which he has supported. “Our goal has always been to help others as well as helping the community around us.” Cllr Castro said: “It is always a delight when different communities do good works especially when they raise money for local charity. “I have witnessed the great work the AMA do in the local community helping others. “Crawley truly is a diverse integrated community. “The Ahmadiyya Muslim community plays a vital role in doing that. “So I was delighted that they had offered this donation for my chosen charity, Forget Me Not, do great work for those suffering dementia which can take form in many ways.