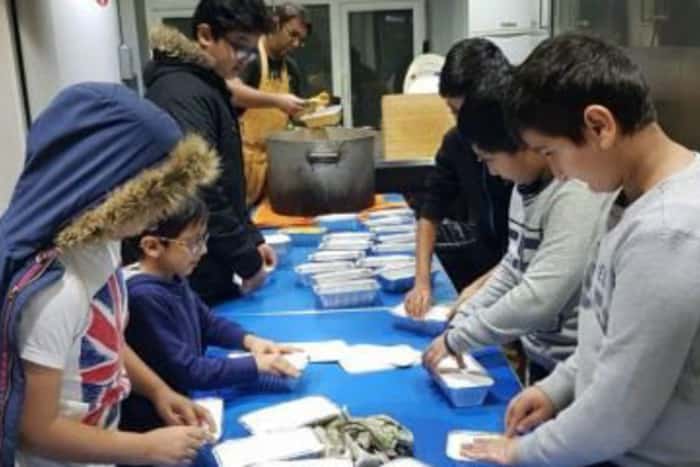 Following a very successful Interfaith event held at Noor Mosque on the topic of Serving Humanity by the Ahmadiyya Muslim community in Crawley, the youth of the organisation put their words into practice by serving hot meals at the Giving Back Crawley homeless feeding centre in the High Street.

Motivated by speeches from the Bishop of Horsham, Mark Sowerby, who had visited the Noor Mosque for the first time and by Imam Mahmood Ayaz and other speakers from the Sikh and Hindu faiths, the youngsters from Noor Mosque helped prepare, pack and serve hot food for Christmas to some of the homeless in Crawley.

Adeel Ahmad who organised the food and his team from the Ahmadiyya Muslim youth organisation said: “Children as young as seven and eight wanted to help those less privileged.

“It was an honour to have people of all faith come to Noor Mosque and giving us the inspiration of continued work we do for charity. Christmas is a special time for people of Britain and it is our honour to serve them. We have been doing charity work ever since Noor Mosque was built and getting children involved is doubly rewarding for us.”

Najeeb Rahman, the president at the Crawley chapter, said: “We always want our youth to be involved in charitable works and to serve our wider community in Crawley has always been our first desire. We want those under privileged to have a memorable Christmas just like any other resident in Crawley.”

Ahsan Ahmedi who arranged the visit of the Bishop said: “Islam is a religion which gives respect to all faiths and prophets as they are all from the same God. To have the Bishop visit Noor Mosque was indeed a great privilege and his words as well as of Imam Mahmood and other speakers were a great inspiration to continue the charitable works we regularly do.

“Serving the people of Crawley is a great honour for us. We will be doing the same on New Year’s Day thanks to the Ahmadi Women who will cook food for the homeless. This will be followed by street cleaning by our youth and children on New Year’s Day after morning prayers which we will offer at Noor Mosque at 6am.”