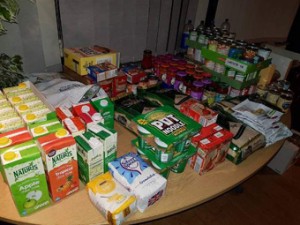 A 20-year-old student from Roehampton University has set up a food donation stall in Putney, to help residents in a critical time of need.

Two women from the Ahmadiyya Muslim Community from Roehampton, spent a weekend in early September collecting items from outside the Co-Op on the Upper Richmond Road.

After seeing a food drive outside Sainsbury’s in Wimbledon, Miss Sameen was inspired to do the same, but with all the donations going to the Putney Food Bank.

Working on a “donate or take” basis the 20-year-old setup shop on 8-9 September outside the supermarket, where she said the response was overwhelmingly positive.

“We collected food from the Ahmadiyya Community ladies and put it on the stall. It was mostly tinned and dried food, which some people took and some people added to.”

“We did it from 12-2pm, so on people’s lunch breaks. On the first day, some people were shy, but I knew some of them were in need. So many people came up and were saying our community needs more of this,” said Miss Sameen.

On the last day of the drive, Wandsworth Cllr, Claire Gilbert, stopped to congratulate the women.