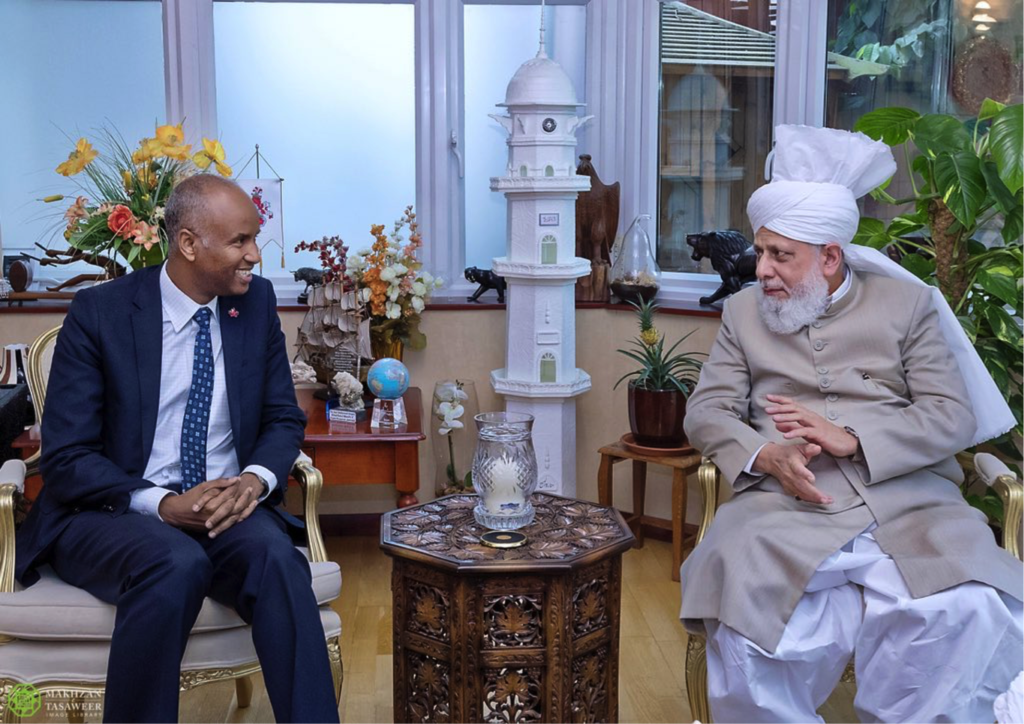 During the meeting, His Holiness and Minister Hussen discussed the continued repercussions of mass immigration to certain Western countries in recent years. Also discussed was the importance of religious freedom, the development of poorer nations and the forthcoming general election in Pakistan.

The Minister also commended the Ahmadiyya Muslim Community for its continued commitment to peace and its positive engagement with other communities and groups. He expressed his sorrow and condemnation of the attack on an Ahmadi Mosque in Sialkot in May 2018.

“All peoples must have the right to religious freedom and governments should not interfere in the personal religious matters of their citizens. However, it is a cause of regret that such interference continues to occur, especially in the developing world. The persecution of Ahmadi Muslims in Pakistan is a major example, whilst the current conflict in Yemen is, in essence, a religious sectarian conflict. Thus, there is a lot of work to be done for the establishment of true religious freedom in all parts of the world.”

“It is wrong to infringe upon the religious rights of any community, no matter how small and it is a cause of deep regret that there is religious persecution even in certain Muslim countries despite the fact that the Holy Quran categorically states that there should be no compulsion in matters of faith.”

Minister Hussen informed His Holiness that he had immigrated to Canada in 1993 from Somalia. Upon this, His Holiness noted that within a quarter of a century of entering the nation as an immigrant, he was now the Minister responsible for immigration, refugees and citizenship.

Upon this, Minister Hussen said:

“I have always said that my development in Canada says more about Canada than it does about me personally and reflects the strength of our immigration system and the means of integration. Canada’s people are very generous.”

Thereafter, His Holiness spoke about the need for the developed world to help developing countries both in terms of humanitarian relief and the long-term development of infrastructure. His Holiness said real progress would only be made when all forms of corruption and injustice were rooted out in the developing world.

During the meeting, His Holiness also extended his best wishes to Canada’s Prime Minister Justin Trudeau and appreciated the fact that the Canadian Prime Minister embraces diversity and is tolerant of different faiths and beliefs.

The meeting concluded with a discussion regarding the forthcoming political election in Pakistan.

“As long as the sword of the fanatical Mullahs (clerics) remains there will be no real change in Pakistan. The local politicians fear the Mullahs more than their Creator. Some educated and decent people have started to raise their voices against the persecution of Ahmadi Muslims but the Mullahs have great street power and use it to incite the masses and drown out any voices of reason. For example, a few years ago Punjab’s Governor Salman Taseer was shot and killed after speaking in defence of Ahmadi Muslims and in favour of religious freedom. The clerics use the pulpit of the Mosques to pollute the minds of the people.”