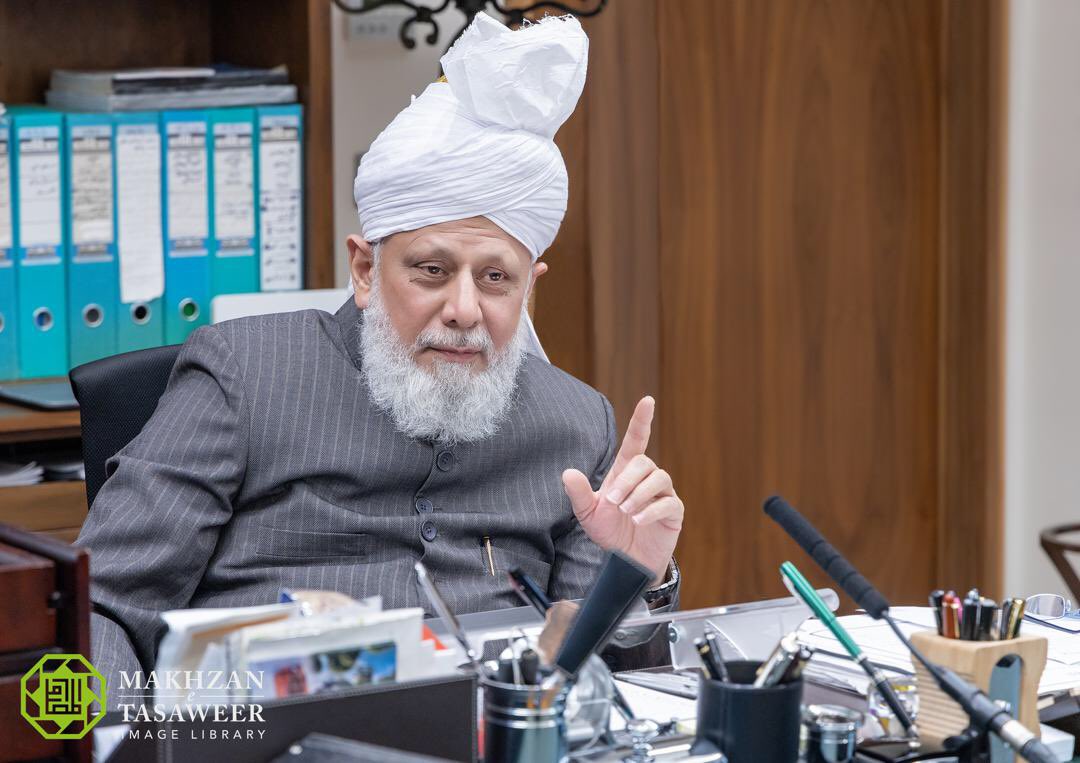 On 16 August 2020, the National Amila (Executive) of Lajna Imaillah Canada was granted a virtual official meeting and audience with the World Head of the Ahmadiyya Muslim Community, the Fifth Khalifa (Caliph), His Holiness Hazrat Mirza Masroor Ahmad.

His Holiness presided the meeting from his office in Islamabad, Tilford, whilst the Lajna Amila members joined from the auditorium of Jamia Ahmadiyya Canada in Vaughan, Ontario.

During the hour-long meeting, the Amila members had the opportunity to present a report about their respective departments and to seek the guidance and instructions of His Holiness on a range of issues.

In order to ensure that new converts to the Ahmadiyya Muslim Community were well integrated, His Holiness instructed that meetings and events should be held in which recent converts are encouraged to actively participate. Furthermore, it was imperative that the new converts should be supported and helped by other members of the Ahmadiyya Muslim Community with sensitivity and consideration.

Furthermore, His Holiness said that greater efforts should be made to spread Islam’s true and peaceful teachings through outreach events and through cultivating personal contacts.

His Holiness also gave detailed guidance regarding the moral and religious training of Ahmadi Muslims and said Lajna Imaillah had a major role to play in this regard. He said that the members of the Lajna administration ought to treat all members with love and respect and to strive to forge friendships with younger members of Lajna Imaillah.

“Ahmadi Muslim mothers should seek to develop a true friendship with their children as this will enable them to guide them better. Furthermore, Amila members should also establish friendship with Ahmadi Muslim girls and guide them. Advise them to pursue whatever education they desire but at same time remind them that they should forever hold fast to their pledge of giving precedence to their faith over all worldly matters. The best way to thank Allah the Almighty for the blessings He has bestowed is to remain firmly attached to one’s faith.”

His Holiness instructed Lajna Imaillah Canada to hold seminars and forums in which Ahmadi Muslim girls and young women are able to easily raise any questions they may have in relation to matters of their faith and religion.

“The National Majlis Amila was supposed travel to London for this Mulaqat on March 27, 2020, but due to COVID-19 restrictions, this plan was put on hold and we were saddened but it was understandable. However, when we learned that Hazrat Khalifatul Masih V (May Allah be his helper) had not forgotten and granted us an opportunity to have a virtual Mulaqat, we were overcome with excitement and gratitude. We were greatly humbled that His Holiness had kept our Mulaqat request in mind and through the blessing of Allah the Almighty, it has become a reality in a way that no one could have foreseen, Alhamdulillah! This virtual visit far exceeded our expectations and it truly was as if our beloved Imam was sitting with us. All members of National Majlis Amila are grateful for this blessed opportunity.”