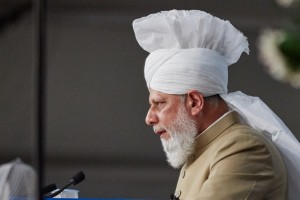 One of the UK’s oldest Muslim communities is to launch an international intervention designed to provide comprehensive solutions towards achieving world peace in light of increasing global tension.

The Ahmadiyya Muslim Community’s ‘Pathway to Peace’ campaign aims to present fundamental solutions to some of the biggest challenges currently facing the world, based on the teachings of Islam.

The nine key points, labelled the ‘Principles of Peace’, will be announced at the annual Jalsa Salana in Hampshire on the 3rd, 4th and 5th August 2018. The convention is the UK’s largest Muslim conference of its kind and will attract over 30,000 people.

Over 1800 people have already endorsed the campaign with the number expected to rise in the days of the convention.

The Caliph of the Ahmadiyya Muslim Community, His Holiness, Hazrat Mirza Masroor Ahmad, has urged world leaders to take on board the principles in an effort to prevent an impending third world war.

The call comes as issues as wide ranging as Brexit and the face off between global nuclear superpowers threatens to cause further devastation around the world.

Speaking about the threat of another World War, Hazrat Mirza Masroor Ahmad said: “Storm clouds forewarning us of a Third World War are getting heavier by the day. The effects of such a war would last for decades to come. Generation after generation of children would, more than likely, be born crippled or with genetic defects due to the lasting effects of the radiation.”

Reminding world leaders of their responsibilities, Hazrat Mirza Masroor Ahmad said: “It is the urgent need of the time for mankind to work towards safeguarding our future. Instead of only blaming Muslims for the global disorder, the world’s major powers should also take a step back and look at themselves. Rather than publicity-seeking politicians stating their intentions to ban Muslims from entering their nations, the world needs leaders who are sincere in their efforts to bridge the differences that divide us.”