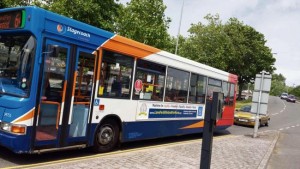 A BRITISH Muslim community is sponsoring 125 buses to run in the South-West of England and Wales – including Gwent – to mark 125 years since its foundation in 1889.

It is part of a wider awareness campaign that has spanned the UK from Glasgow to Bournemouth and also sponsored buses across the UK during the Queen’s Diamond Jubilee.

Its message is simple – that it stands for loyalty, freedom, equality, respect and peace, values common to Islam and Britain.

Muhammad Noman, Regional President of the Ahmadiyya Muslim Community South West said: “There remains a concern about Islam especially in light of events. We certainly believe in jihad – but the true concept of jihad is one of self-reformation and not of harming others.

“A true Muslim can never raise his voice in hatred against his fellow citizens. He should remain loyal and fully abide by the laws of the land of which he is a subject.”

The campaign comes at a time when there are renewed debates for ‘British values’ to be asserted by all the citizens of Britain.

Muhammad Noman added: “The true peaceful Islam is poles apart from the exclusion and hatred that is preached by a minority.

The buses – which run in Newport – feature the community’s slogan of ‘Love for All, Hatred for None’.