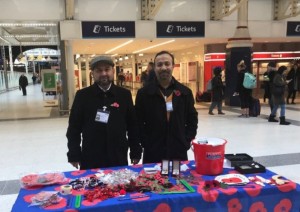 Their total has already reached £65,000, and they are yet to collect the money from schools.

The Royal British Legion help members and veterans of the British Armed Forces, as well as providing support for their families and dependants.

Siemah Shafiq and her husband Mubasher Ahmad, along with other volunteers, kept stalls running all day in order to raise as much money as possible.

Some volunteers even took time off work to help the campaign, which is in its second year.

Ms Shafiq said: “It is part of our Muslim teachings that you should look to help people in the local community.

“We are pleased with how much we have raised. We are part of the community and we look to help everybody.”