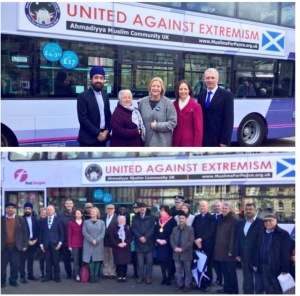 All of Scotland’s major Muslim groups declined to attend the launch of a campaign against violence and discrimination directed towards the Ahmadi sect, as well as the Paris and Brussels terror attacks.

Representatives of the local Sikh and Jewish communities, and the Church of Scotland’s inter-faith group were all present, alongside local politicians, representatives of Police Scotland and Glasgow’s lord provost

However, representatives of the Glasgow Central Mosque and the Muslim Council of Scotland announced at the last moment they would not be coming, the Guardian reports.

Glasgow’s Ahmadi community had organised the event after Tanveer Ahmed, a Sunni Muslim, murdered Asad Shah, an Ahmadi shopkeeper from Glasgow, for allegedly “disrespecting” Islam after he wished his “beloved christian nation” a happy Easter.

The event’s organiser, Ahmed Owusu-Konadu, explained: “We are undertaking this campaign as part of our stand on the rejection of all forms of extremism and as a message of solidarity with all who have been its victims, including Asad Shah, and others in Paris, Turkey, Brussels, Pakistan, Nigeria.”

Ahmadis have some theological differences with mainstream Muslims, in that they venerate Jesus, have an extra prophet, and are generally peace loving.

Consequently, in Pakistan, the national constitution has been specifically amended to declare Ahmadis non-Muslims – a charge with grave consequences in the fundamentalist nation.

Such sectarian hatred is now becoming commonplace in Britain. An organisation affiliated to the Muslim Council of Britain, the largest Muslim umbrella group in the country, distributes leaflets calling for Ahmadis to be killed in top universities and on London streets.

As part of the United Against Extremism campaign, posters sponsored by the Ahmadi community will be displayed on buses in Glasgow, Edinburgh and Dundee for two weeks.

Some members of Scotland’s Muslim community will be less than surprised that Glasgow Central Mosque failed to stand against extremism.

The mosque, the largest in Scotland, is currently consumed by an internal conflict after seven liberal members of its executive committee resigned amid claims of intimidation by more conservative figures and the exclusion of women.

Police Scotland are also investigating alleged links between the head of religious events at Glasgow Central Mosque and a banned sectarian group in Pakistan.

A recent BBC investigation claimed that Sabir Ali was president of Sipah-e-Sahaba, a militant political party that has accepted responsibility for deadly sectarian attacks against Shia Muslims and Ahmadiyya minorities in Pakistan, and was banned by the Home Office in 2001.

Furthermore, in January, The Herald reported that the Mosque had donated money to the “army of darkness” group Tablighi Jamaat who promote an extreme ultra-orthodox brand of Islam.

U.S. Homeland Security has accused the group of being a recruiting ground for extremists, and it was linked to the San Bernardino terror attacks in California last year.