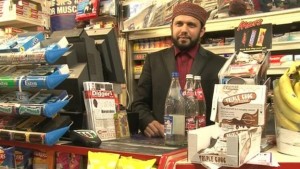 The message “united against extremism” will be carried on posters on 50 buses.

Mr Shah was an Ahmadiyya, a group known for its peaceful interfaith concerns.

He died after an attack outside his shop on 24 March. Murder accused Tanveer Ahmed, 32, from Bradford, later said he killed the 40-year-old as he had falsely claimed to be a prophet.

Politicians and police joined with different community and faith groups, including Christian, Jewish and Sikh, for the launch of the campaign in Glasgow.

He said: “We want to reassure people and to discourage the extremists by showing that we are united. We want to increase the awareness of Islam and reverse the misconceptions.

“People in other communities have given their support for this campaign and it shows that we stand united.”

Mr Abid said Mr Shah had donated money for a previous bus campaign raising awareness of the Ahmadiyya community, an Islamic sect which moved its headquarters to the UK after a law in Pakistan banned its members from identifying themselves as Muslims and calling their places of worship mosques.

“The purpose of extremism is to cause division and I think the response is for us to come together. We in the Jewish community stand shoulder to shoulder with our Muslim cousins.”

Charandeep Singh, general secretary of Glasgow Gurdwara, said he hoped the campaign would help get the anti-extremism message across.

He said: “It’s important that we are coming out with these types of messages.

“It’s already a message that we support and believe in and it’s very warming for me to see different faith communities come together to support this. It shows that one Scotland approach.”

Mr Shah, who had moved from Pakistan to Glasgow almost 20 years ago, was found with serious injuries outside his shop on Minard Road, in Glasgow’s Shawlands area on 24 March. He was pronounced dead in hospital.

The shop keeper was killed just hours after he posted an Easter message on Facebook to his customers.

The message said: “Good Friday and a very happy Easter, especially to my beloved Christian nationx”

During the police investigation officers claimed the incident was “religiously prejudiced” and confirmed both men were Muslims.

Mr Ahmed has been charged with murder and made two court appearances where he made no plea and was remanded in custody.