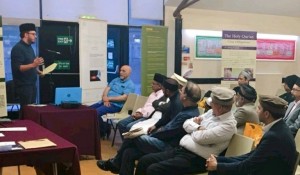 More than 60 people came together at Valley Park community centre last weekend to share food and learn more about Ramadan as part of ‘The Big Iftar’ – an event organised and hosted by local Ahmadiyya Muslims, a community who live by the motto: ‘Love for All, Hatred for none.’

The event, aimed to shed light on the concept of Ramadan fasting and to promote “a deeper understanding of the peaceful teachings of Islam”,  was attended people from several different faiths and ethnic backgrounds.

Speaking at the event, Mr. Ahsan Ahmedi, the regional president of the community, highlighted how the concept of fasting is not unique to Muslims. Many different faiths including Christianity, Judaism and Hinduism practice fasting in different forms but share the same goal of achieving higher levels of spirituality. Mr. Ahsan also debunked the myth that Islam compels everyone to fast no matter what. He explained that the Quran and Hadith place strict limits on fasting, as it’s not meant to cause physical harm. Besides the spiritual benefits, he claimed that there were scientifically proven health benefits to fasting describing it as a “detox for the soul and a detox for the body.”

The regional missionary in charge of the community, Mr. Humayon Uppal, described the origins of the Ahmadiyya Muslim Community, which was founded in 1889 by Mirza Ghulam Ahmad and how Islam’s peaceful teachings promoted cohesion among different sections of a society. “True Islam” he said, gives complete freedom of religion, upholds women equality and signifies on loyalty to one’s country. The Ahmadiyya community is now established in more than 210 countries and is led by a system of Khilafat (Caliphate.  His Holiness Hazrat Mirza Masroor Ahmad is the fifth Khalifa of the community and is based in London from where he leads his global community.

After a silent prayer, the guests were served with refreshments including dates, fruit kebabs, samosas and drinks to break the fast. Mr.Humayon then led the members of the community in congregational prayer after which a delicious dinner was served which included; chicken korma, vegetable rice, spinach paneer, curry and naans followed by tea and deserts and guests were given goody bags to take away.

The organisers told Eastleigh News they had received positive feedback from the guests that attended who said they had enjoyed the food and the opportunity to learn about Islam. One guest from Southampton said:

‘I enjoyed sharing experiences, made new friends and felt very welcome. Most of all, I learned a lot.”