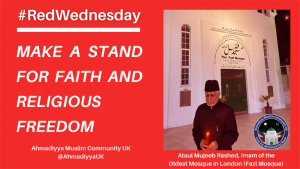 The Ahmadiyya Muslim Community stands in solidarity with persecuted Christians and all who suffer for their peacefully held beliefs this Red Wednesday.

Red Wednesday, this year being held on 25 November, is an initiative by the NGO Aid to the Church in Need whereby people express solidarity with those suffering and public buildings are lit up in the red, to denote the colour of martyrdom, in solidarity with suffering Christians around the world.

Ahmadi Muslims are acutely aware of persecution on grounds of religion and the suffering of Christians in many countries – as evidenced in the report by the Bishop of Truro and the recent report ‘Suffocation of the Faithful’ by the All-Party Parliamentary Group for the Ahmadiyya Muslim Community.

Often blasphemy laws are used to target religious communities, and followers of different faiths and beliefs are imprisoned under these unjust laws under false allegations.

“We welcome and support ‘Red Wednesday’ initiative. It is an opportunity to remember the horrific reality of religious violence and intolerance in our world. We stand shoulder to shoulder with Christians around the world facing persecution. Let us hope that soon individuals irrespective of their faith or belief can live in peace.”