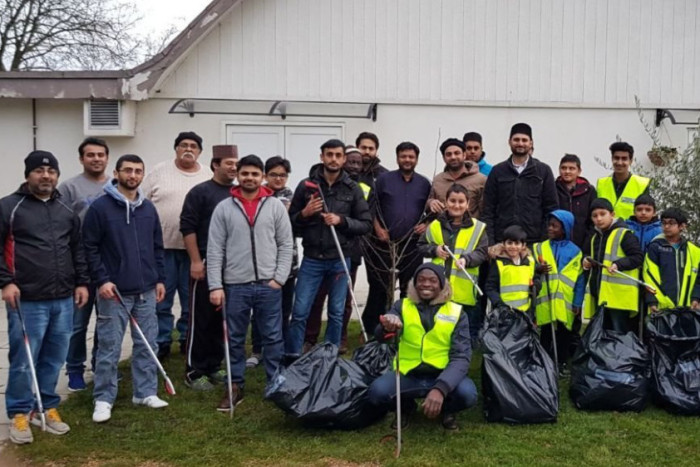 A litter-picking event designed to instil community spirit within youngsters saw a group of Ahmadi Muslim youths take to the streets of Crawley on New Year’s Day. Armed with litter picks and bin bags, the youngsters joined hundreds of others across the UK at around 7am to clear rubbish as part of the initiative which is in its third year.

The dozens of volunteers in the South East region also focused on areas such as Farnham and Aldershot as well as Crawley town centre and neighbouring areas. The AMYA Regional Co-ordinator for the South East region, Harris Hafeez said: The Holy Prophet Muhammad (peace be upon him) taught us that cleanliness is a part of faith.

“This alongside our passion to train our youth to be model citizens are the motivating factors for this event” Following their hard work, the youngsters enjoyed a hot English/Indian breakfast. AMYA is an auxiliary body of the Ahmadiyya Muslim Community, a religious and charitable Muslim organisation.

With more than 8,600 members spread across 124 chapters in the United Kingdom, AMYA frequently partake in tree planting, homeless feeding and foodbank donation sessions. In 2017, it raised over 600,000 pounds for various British charities, planted 25,000 trees, fed 14,000 people living in poverty and visited over 6000 people in care homes and hospitals to counter loneliness.

The worldwide leader and Caliph of the Ahmadiyya Muslim Community, His Holiness, Hazrat Mirza Masroor Ahmad, who resides in London, encourages the youth to actively involve themselves in community service and become productive members of society and dispel negative stereotypes through positive efforts. He teaches that loyalty to one’s nation is part of faith.