Date of this year’s International Ramadhan Appeal Telethon was Saturday 26th May 2018. 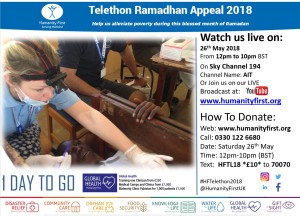 The telethon consisted of a series of programmes from Humanity First in Pakistan, Ghana, The United Kingdom, France, Germany, Canada and The United States as part of the Ramadhan campaign.  This was the third time that Humanity First had held telethons in multiple countries on the same day.

On the day, the first to Broadcast was Humanity First Pakistan. The broadcast ran for just over 7 hours from MTA studios in Pakistan as well as on YouTube, and donors could give towards the following projects: Gift of Sight, Water for Life, Maternity Camps run by the Global Health programme, and the Chohra schools in Tharparkar run by the Knowledge for Life programme.

The next country to broadcast was Humanity First UK. The UK event took place in Tahir Hall, Baitul Futuh and was broadcast live via channel 194 on the Sky platform, as well as being streamed live via YouTube.The projects supported by the UK campaign included, Water For Life, Knowledge for Life, Global Health as well as a new initiative: the Institute of Special Education Rabwah. This aims to raise funds for a new school for children with disabilities in Rabwah. During the broadcast there was also a transmission from Humanity First Bangladesh to give an update on the work carried out as part of the Rohingya Appeal 2017. 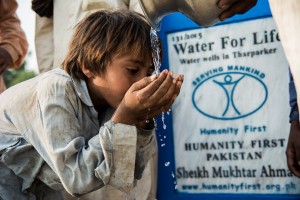 The last country to broadcast from Europe was Humanity First Germany. Their broadcast ran for 5 hours between 3pm and 5pm (CET) and like the other broadcasts, was also transmitted via YouTube.

Humanity First USA raised an incredible total from their 5 hour broadcast, with donations going towards programmes such as Food Security, Knowledge for life as well as the new Nasir Hospital in Guatemala.

In total the Humanity First International telethons has so far raised just under $3.5 million. The Ramadhan campaign still has 20 days to go. If readers would like to view any of the broadcasts then the recordings are available at https://humanityfirst.org/globaltelethon/. Readers can also continue to donate to the appeal by clicking the “Donate” link on the top right hand corner of the same page.

Humanity First International would like to thank all the volunteers assisted during the proceedings. We would also like to thank MTA International, as well as its various local branches, without whose support the telethons would not have been possible.