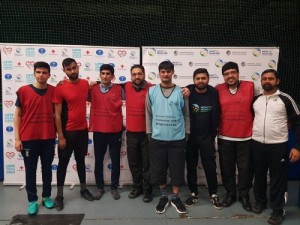 “Football has always been a sport that unites communities” says event organiser Abdul Rauf Lodhi “Our youth members are not only keen footballers but they are also committed volunteers who strive to serve those in need…”
“We are British, we are Muslims and we stand united against extremism…”

A few days before the Kerslake Report into the Manchester Arena bomb attack, forty teams made up of 250 Muslim youths from all over the country took part in a 24 hour football fundraiser to help victims of the horrific event.

The football tournament, held at the Powerleague Trafford Sportsdome, included two teams from the Salford branch of Ahmadiyya Muslim Youth Association (AMYA),which was also prominent in helping to clear flood ravaged houses in Lower Broughton a few years ago.

The tournament, in which one game was refereed by the Mayor of Trafford, raised over £10,000 and all the money raised will go towards the UK Solidarity Fund, set up by British Red Cross in 2017 following attacks in Manchester and London to help people affected by terror attacks in the UK. Also benefiting from the donations will be Humanity First, a humanitarian charity run by the Ahmadiyya Muslim Community to help impoverished regions around the globe regardless of faith, colour or creed.

“We held this event in memory of the 22 victims of the Manchester Arena attack which took place last year” says event organiser, Abdul Rauf Lodhi “We are grateful to the youth who travelled far and wide to take part and make it a resounding success. This event is one of many in an effort to help our youth understand the true peaceful values of Islam and to become involved positively while having fun.

“Football has always been a sport that unites communities” he adds “Our youth members are not only keen footballers but they are also committed volunteers who strive to serve those in need as they have been taught that this is a religious duty of a Muslim…We are British, we are Muslims and we stand united against extremism.”

The event was part of the ‘Mercy for Mankind’ Charity Challenge 2018, a charitable initiative started by AMYA aiming to contribute to British society financially, socially and environmentally. Through its various activities, AMYA in the year of 2017 alone raised £800,000 for more than twenty British charities, bringing its total to over £3 million.